One large problem faced with handwritten word recognition is the following paradox: we can’t read a word without knowing the characters in the word, but we also can’t read a character in the word without knowing the word. To solve this word-character paradox, a dynamic programming approach was used and compared to neural networks trained with crisp and fuzzy desired outputs (see 1995 journal articles, “Handprinted word recognition on a NIST data set” and “Comparison of Crisp and Fuzzy Character Neural Networks in Handwritten Word Recognition“). We observed that neural networks often produced high confidence outputs for patterns that were not characters and did not look like characters. This incorrect character identification could lead to word recognition errors. 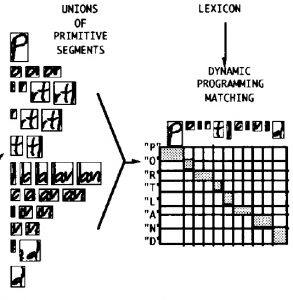 This figure details the dynamic programming matcher. The matcher takes a word image, a string, and the word image primitives and returns a value between zero and one indicating the degree to which the word image represents the string.

Guess what the following letters are:

Guess what the following characters are:

See the answers to the above ambiguous characters.

Much of the research in these publications was conducted in collaboration with Dr. Gader’s Ph.D. students. 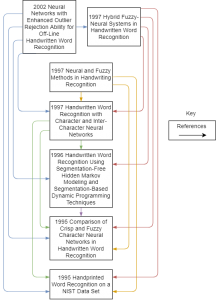