For your reference, below is a list of of the exercises in this series:

Exercise 1: Getting Familiar with Python: an Extraterrestrial Solar Radiation exercise.

Solar radiation flux, or irradiance (G) in W/m2, outside the earth’s atmosphere and normal to earth’s surface (Gon, where o stands for outside and n for normal direction) may be calculated as a function of the day in the year according to the following equation below.

Gsc is the solar constant and equal to 1367 W/m2 and n is the day in the year. The term contained within cosine is in units degrees.

Packages and Calling Functions: In Python, there are several powerful computing packages commonly used that should be declared at the top of your .py, or python file. For example, some of the more popular computational packages useful for engineering include numpy, scipy, matplotlib and pandas, among others. These must be installed on your computer, either manually using a package installer (e.g. pip installer), or are installed by default with many Python distributions, including the Anaconda Distribution that we will use in this exercise. For example, if we want to utilize the numpy package we can use the import function and say:

The input contained within parenthesis should have units radians and the output will be in units radians. For example, to correctly use the equation for Gon, the cosine term will look like the following.

because we need to convert from degrees to radians by multiplying everything by np.pi/180.

Exercise
Complete the following questions that deal with determining Gon using the above equation and a more accurate form of the equation (not shown, Gon_accurate function), as a way to get comfortable computing in Python using some basic techniques, learning to call and declare functions, plotting data using the package matplotlib, and using two different methods to evaluate python code, namely a traditional editor named Spyder and a web based notebook style editor called Jupyter.

Now we will plot between only these days by changing days to equal  days=np.arange(61,183,1). Below is a screenshot of the cells and output. 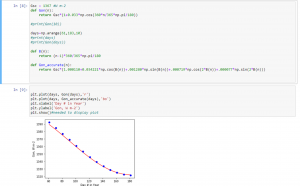 Solar time is used in all sun-angle relationships. It is based on the apparent angular motion of the sun across the sky, with solar noon the time the sun crosses the meridian of the observer. Two corrections are needed to convert from standard time.

The equation used to calculate solar time is below.

Here, n is the day in the year and B has units degrees. The units for the right hand side of the equation used to calculate solar time are minutes. 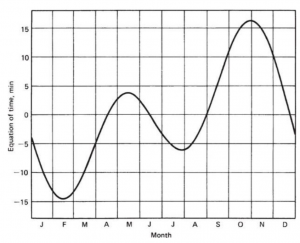 To determine Lst, multiply the difference in time between local standard clock time and Greenwich Mean Time (GMT) by 15°. This relationship comes from thefact that the sun takes 4 minutes to traverse 1° of longitude. Thus, if your local standard clock is 1 hour behind GMT then LST is 15°. You must account for Daylight Savings Time (DST): for example, DST in the United States takes place between the dates of March 8th and November 1st. During this time, the clocks are advanced by 1 hour and thus the difference between the clocks in the United States and GMT changes by 1 hour. For example, if DST is 14:00 then Local Standard Time (LST) which should be used to determine solar time and Lst, is 13:00.

Figure 1. Equation of time verses month in the year. From Duffie and Beckmann, Solar Engineering of Thermal Processes, 4th Edition