Nano satellites, typically weighing between 1 and 10 kg, require very minute forces for executing accurate maneuvers for station keeping, orbital corrections, and possibly attitude control. These forces are often of the order of several micronewtons or less. With the reducing scales of size and weight, the constraints on the propulsive devices have rendered conventional chemical/ion thrusters unsuitable, mandating very lightweight microthrusters which occupy the smallest possible footprint. Typical power budgets available for nano-satellite propulsion sub-systems are of the order of a few watts, while allowing no more than a few hundreds of grams. Several competing technologies, (cold-gas thrusters, pulsed plasma thruster, Free Molecular Micro Resistojet (FMMR), Hall thrusters), have been proposed to fulfill this need. However, each of these technologies has certain limitation vis-à-vis the nature of thrust, efficiency, power and weight. Cold-gas thrusters exhibit the lowest specific impulse (Isp ~ 65 s) of all the options1, which translates into inefficient propellant usage causing significant payload penalty for long term missions. The pulsed plasma thruster, as the name suggests, only provides short and frequent ‘bursts’ of thrust called Impulse bits, instead of a continuous, steady thrust, a problem further compounded by its poor efficiency (~3%)2. The FMMR offers only marginal improvement over cold-gas microthrusters (Isp ~ 80-160 s), and suffers from significant energy losses due to thermal dissipation inherent in the working principle3. Miniaturized Hall thrusters suffer from rapid deterioration in efficiency due to geometry constraints and scaling effects in addition to high power requirements4.

The Free Molecular Electro Jet (FMEJ)5 is a new class of electric micro-thrusters for small satellites, with a wide array of applications ranging from orbit maintenance (e.g., drag compensation) to attitude control.This class of thrusters aims to provide a means to impart milli-Newton-seconds of impulse while keeping the power requirement to a minimum. The FMEJ is a proposed improvement over the existing Hall effect thrusters (HET), and the Free Molecular Micro Resistojet (FMMR). While miniature HETs require external magnetic field and upward of 100 watts power budget, the FMMR is an electro-thermal class of microthruster with tens of watt level power requirement. The proposed FMEJ design incorporates electro-hydro-dynamic flow acceleration techniques to increase the efficiency of energy transfer from the electrical source to the propellant, and is predicted to produce similar thrust with a lower power than needed for the FMMR. 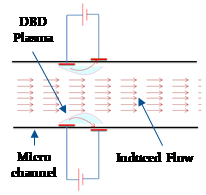 Fig 1. Schematic of the FMEJ

A.2 Physics of the FMEJ

The FMEJ operating principle involves the concepts of electrohydrodynamics (EHD) and plasma physics. Weakly ionized plasma is generated using either a dielectric barrier discharge, or conventional glow discharge, in a microchannel by applying a strong electric field. The region of ionization extends a finite distance away from the electrodes by the Townsend mechanism, enabling the interaction between ionized region and the bulk neutral region. This interaction takes the form of different types of collisions (elastic, inelastic, charge-exchange, ionizing), by which momentum is transferred from the charged particles to the neutrals.

The fluid flow in such a channel is governed by a set of partial differential equations known as the Navier Stokes equations, which put down the principle of conservation of mass, momentum, and energy in mathematical form. The physics of a plasma actuator may be expressed by the momentum conservation equation, presented below.

This equation relates the change in momentum of the fluid (LHS term) to various macro and micro level phenomena. Momentum loss in inelastic collision, changes in momentum by virtue of changing amount of a specie, and momentum diffusion resulting from pressure gradient are inherent to all fluid flows. The fourth term on the RHS captures the interaction of plasma with neutral fluid via collisions, which results in transfer of momentum from the charged species to the neutrals, resulting in an induced bulk velocity. Plasma discharges in such application are self-limiting by virtue of the phenomenon of charge deposition, which cancels the applied field locally, leading to the quenching of the plasma microdischarge filament. This self-limiting nature ensures the current and power drawn by a plasma actuator device do not exceed the system architecture limits.

While various other embodiments are foreseeable, the FMEJ micro thruster was numerically simulated as a channel (see Fig. 1). Various numerical models are available to simulate plasma under the given conditions. These models differ in accuracy and computational cost. In order to numerically model the plasma, a two species fluid model was verified against reported 1-D and 2-D simulation results for plasma discharge between parallel plates.6 We employ an in-house multi-scale ionized gas (MIG) flow computational platform for these studies. MIG is primarily finite element based, is modular, and suitable for ready implementation for stiff multidimensional problems relevant for capturing the physics of FMEJ. This code was organically developed by the Subrata Roy and his group over the past 14 years and has been applied to solve both, plasma and gas dynamic problems at low and high pressures, and at macro and microscales for space propulsion and aerospace applications.7-9

The two species fluid model uses Local Mean Energy Approximation (LMEA) to model positive ions and electrons. From this plasma simulation, assuming the plasma is weakly couple with the gas, a body force and heat source are calculated in order to run a rarefied gas simulation using Navier-Stokes equations and slip boundary conditions that allows us to find the performance parameters of the micro-thruster.

The experimental testing of the FMEJ concept involves several planned phases. In the first phase of the experimental work, conventional DBD actuators have been tested at pressures relevant to the FMEJ operation to assess their behavior in the free molecular regime. This includes thrust and power characterization of macroscale DBD actuators using a commercial O’Haus force balance as well has the indigenous μNTS.

a. Results from Finite Element based Numerical Simulation 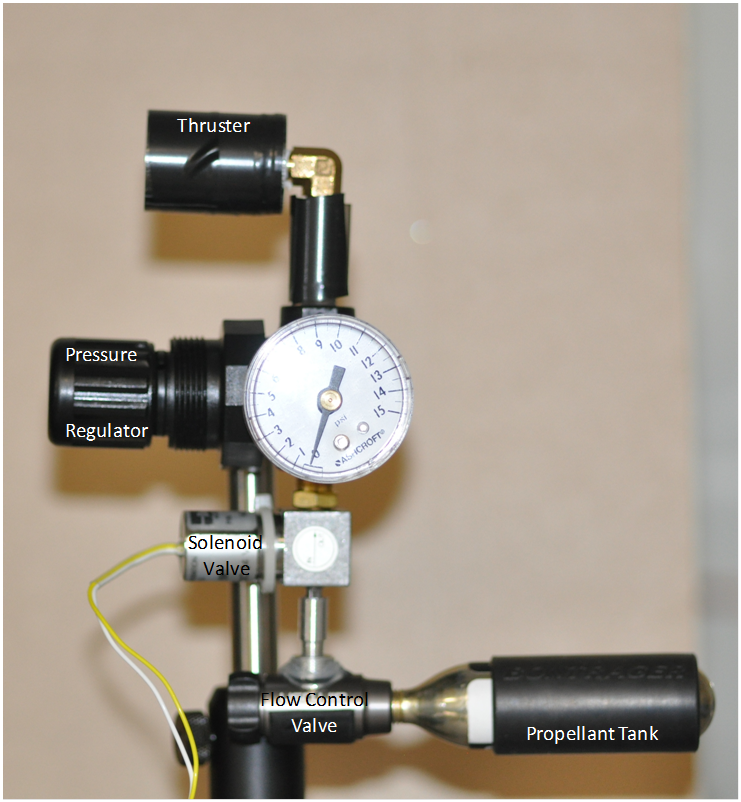 In order to compare the device, literature review data is provided in Table 2 for FMMR and the results obtained for FMEJ using the body force distribution from the plasma simulation in a rarefied gas model. The preliminary result shows an increase of efficiency for FMEJ in comparison with FMMR with similar mass flow rates and specific impulses.

b. Results from Low Pressure Testing of DBD Actuators

The results from the low pressure characterization of conventional macroscale DBD actuators have been promising. Figure 3 taken from Appl. Phys. Lett.14 plots the thrust and effectiveness trend for Teflon dielectric at difference thicknesses as a function of pressure. Results suggest that as the pressure goes down, thinner dielectrics undergo a higher force increase than thicker ones. Furthermore, thinner dielectrics demonstrate a higher increase in effectiveness than thicker ones, indicating a preference for thin dielectric to optimize power requirements. These trends suggest that further reduction in dielectric thickness may provide improved performance at the thrust levels needed for a microthruster.