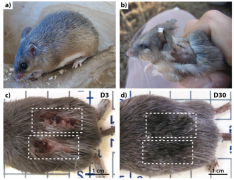 My research program into the relationship between cellular processes and tissue mechanics leverages a novel model of mammalian regeneration, the African Spiny Mouse, to understand and combat fibrosis in humans. Fibrosis accompanies many acute and chronic diseases and is the cause of >40% of deaths in the US. Fibrotic processes often increase the effective stiffness of tissue, creating an interesting overlap of mechanical and biological changes.

The African Spiny Mouse (Acomys) can regenerate normal matrix after injury, with minimal scar tissue after many types of trauma, including full-thickness cuts, burns, myocardial infarction, spinal cord injury, and muscle necrosis. Unfortunately, what enables this adult mouse’s with this remarkable ability to regenerate normal matrix is currently poorly understood. My team is working to uncover the secrets of Acomys regeneration so that we can help humans avoid fibrosis.

The R35 MIRA is support for Early Stage Investigators to tackle hard problems in basic medical science, and I was awarded $1.8M to engineer systems to understand fibrosis. My broad goal is to build model systems of mammalian regeneration, to identify mechanisms of cell contractility, and to target downstream effectors that control fibroproliferative cell function. This award will enable me and my collaborators to determine the mechanisms of normal matrix regeneration in Acomys by (i) utilizing engineered in vitro platforms, (ii) engineering Acomys–Mus chimeras, and (iii) creating Acomys induced pluripotent stem cells for future use as in vitro and chimeric animal model systems.

Many amphibians can regrow entire limbs and organs, however, mammalian regeneration is essentially unheard of in the natural world. This research will test the hypothesis that mechanical stimuli can direct regeneration by providing controlled mechanical stimulation of cells from regenerative (Acomys) and normal (Mus) mice. Because the mechanical microenvironment of cells is so dissimilar in Acomys and Mus animals, we cannot investigate our hypotheses in vivo. Here, we control the mechanical microenvironment independent of cellular matrix production by controlling mechanical stretch, substrate stiffness, and soluble factors presented to cells. Development of a model to control fibrosis may lead to secrets of successful regeneration in mammals. With Malcolm Maden.